Long muscle on the flat of the palm.

Unfortunately, not everyone is born with the palmaris longus - about 14 percent of the population is reported to have the absence of this muscle. Symptoms of an injury to this area include a prickling pain in the palm or base of the thumb, as well as the distal forearm. It may be difficult to grasp and use items, such as cups or tools. For strains of the palmaris longus, massage and stretching techniques are utilized. NSAIDs, such as ibuprofen, are taken to ease the pain and inflammation of the injured palmaris longus.

Plastic surgery, primarily reconstructive hand surgery relies of tendon grafts for which the palmaris longus satisfies the desired prerequisites of length, diameter, and availability. Using the palmaris longus will not result in any differentiation of functionality or aesthetics.

Medial epicondyle of the humerus through the common flexor tendon.

Anchors the skin and fascia of the hand to keep it from sliding toward the phalanges.

Aids the flexion of the wrist. 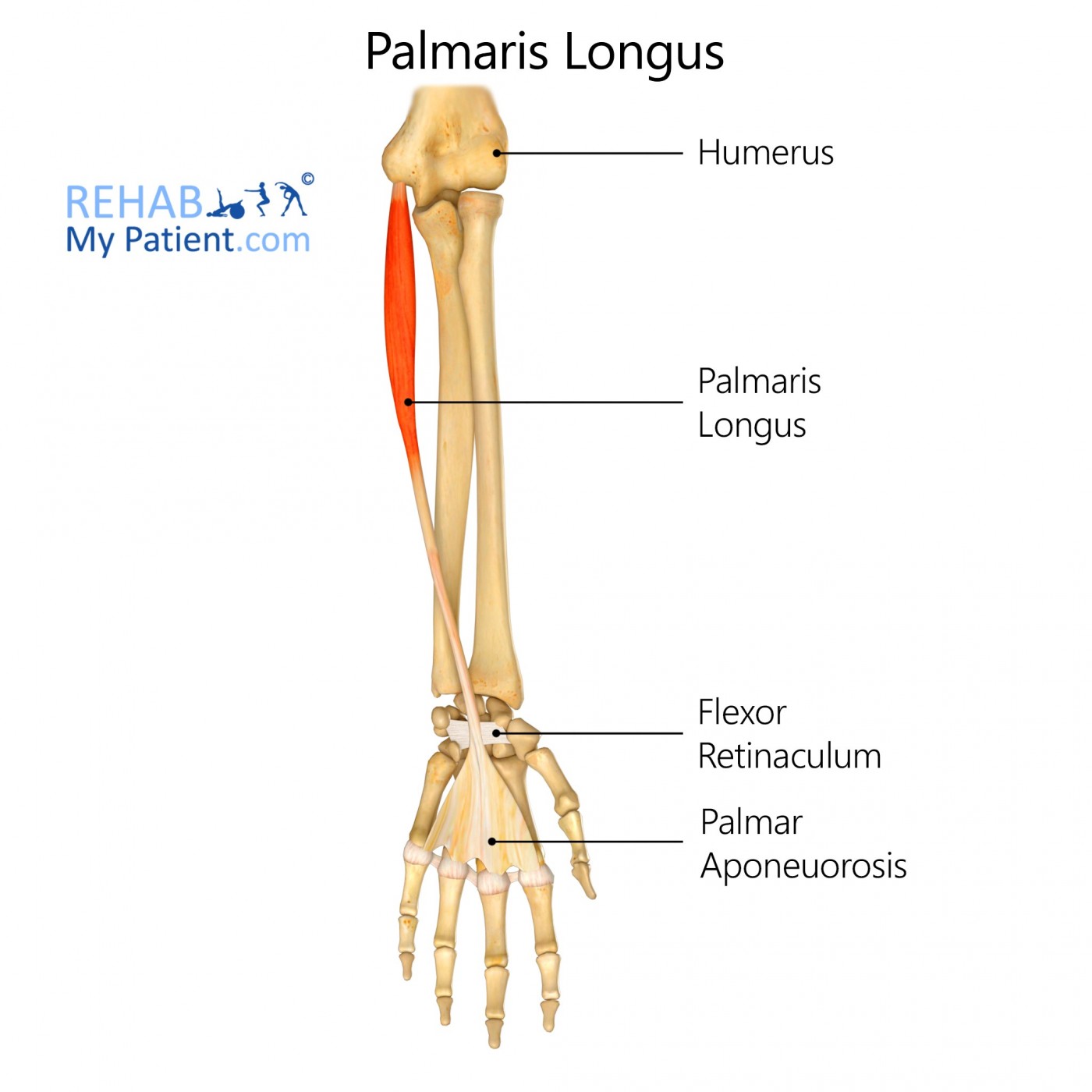 A study was conducted to examine the differentiation between populations who were found to have an absence of the palmaris longus. Although, the study did reveal some variation, there was not enough for statistical significance. The study was completed with 300 Caucasians, splitting evenly for gender. There does seem to be some variance according to ethnicity, however, that was beyond the scope of this study. Thompson, NW, Mockford, BJ, and Cran GW, May 2001, “Absence of the palmaris longus muscle: a population study”. The Ulster Medical Journal, V 70, N 1, p 22-24

Mbaka, O and Ejiwunmi, Adedayo B., May 2009, “Prevalence of palmaris longus absence – a study in the Yoruba population”. Ulster Medical Society V. 78(2)

While kneeling, lean over a bench while holding a lighter-weighted barbell or a low weight dumbbell in each hand. Hold the weight with palms facing up to the ceiling. Place the back of your forearms on the bench while your hands dangle over the far edge. Begin by keeping your wrists straight in line with the rest of your forearms. Slowly bend your wrists back as far as you can comfortably allow it. Then, slowly bring the weight back up and past the starting point, giving it a little contraction. Continue doing ten repetitions for three sets.