As the longest muscle in the body, the Sartorius muscle is a long, thin muscle running down the length of the thigh, amongst the anterior compartment. The upper portion forms the lateral border for the femoral triangle.

The Sartorius muscle is the long muscle that is attached to the lower portion of the outer hip toward the top. It extends downward from the hip, crosses atop the inner thigh and connects with the inner knee. This muscle is commonly injured when running, from a direct hit such as in football, or jumping around. Gymnasts and dancers will often end up with an injury to this muscle, which can cause both groin and hip pain. Common treatments include a combination of anti-inflammatory medication to reduce pain and swelling, stretching exercises, icing the area affected, rest, and rehabilitation exercises.

Anterior superior iliac spine in addition to the upper portion of the notch beneath the landmark.

Surface of the tibia medial in relation to the tibial tuberosity and slightly below the medial condyle.

Sends a slip of the tendon along to the capsule of the knee joint.

Attaches to the anterior of the gracilis as well as the semitendinosus.

Lateral and flexion rotation for the hip.

Small branches and saphenous branches of the descending genicular artery.

Inferior and superior medial genicular arteries of the popliteal artery. 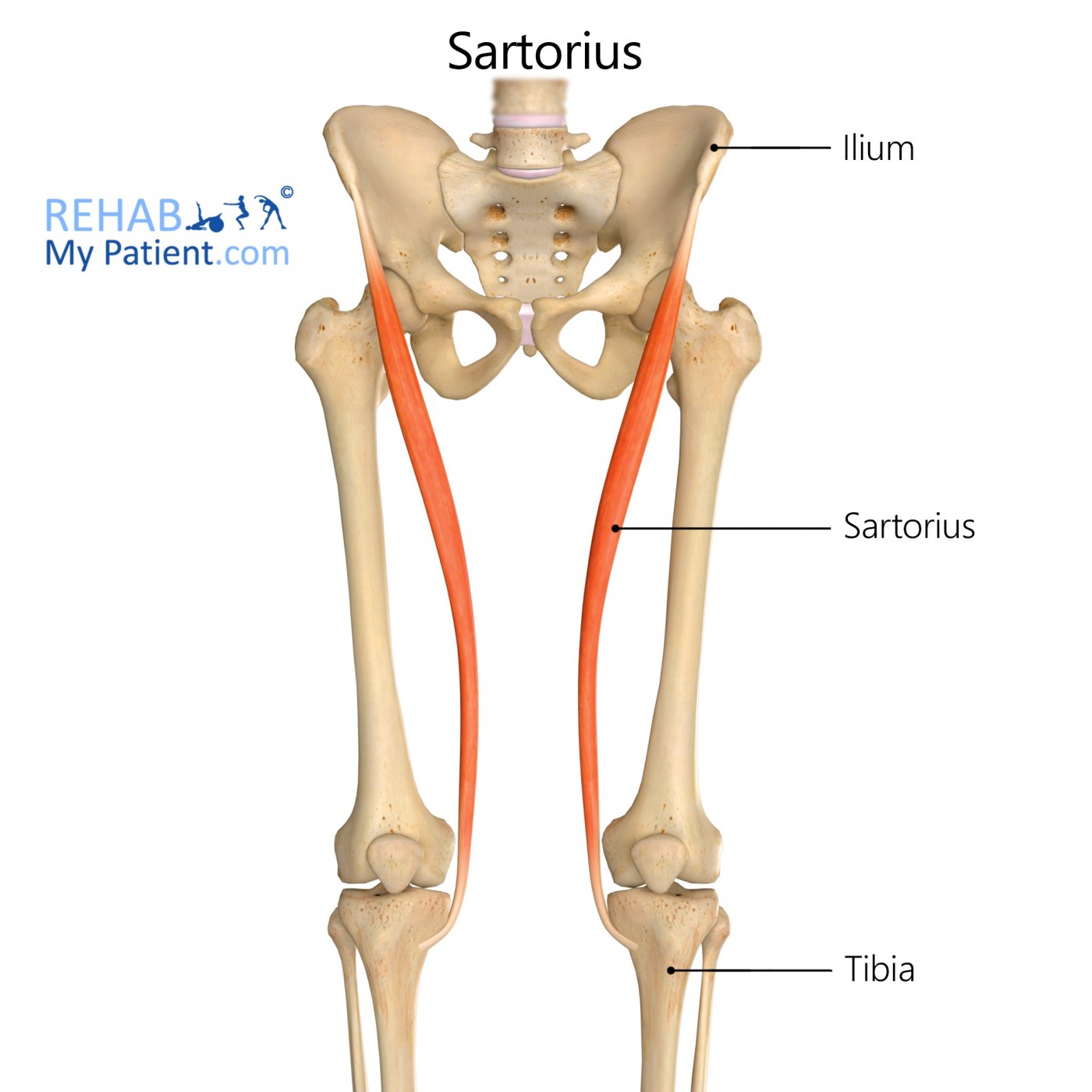 To demonstrate the safety and feasibility in the proximal Sartorius muscle for those patients who have peripheral occlusive artery disease, a study was conducted. The authors carried out a retrospective analysis of 53 patients, who had 56 proximal Sartorius muscle flaps. Indication for the flap procedure was postoperative lymphorrhea in nine individuals, 13 were at graft risk and 34 had a graft infection. Postoperative and preoperative patencies of the SFA and PFA were all documented. At the follow-up appointments, limb salvage and flap viability wound healing were examined. The study concluded that local muscle flaps are vital additions to the techniques used in vascular surgery when treating complicated groin wounds. Where SFA is occluded and the PFA is patented, there is no associated increased risk of flap loss in proximal sartorius muscle rotational flaps.

Stand facing a bench or other elevated platform so that the body is three feet from the bench. Transfer the weight to the affected leg and place the foot of the other leg onto the platform. Breathe in deeply. When exhaling, slowly bend the elevated leg and press the hips forward until feeling a mild stretch in the front of the thigh. Only stretch as far as possible without causing any undue pain. Hold the stretch for 30 seconds and relax. Keep the torso straight and upright for the duration of the movement. Continue for 10 repetitions, then repeat on the other leg.