Osteosarcoma is considered to be the most common form of cancer developing within the bone. Just like all of the other osteoblasts within normal bones, the cells forming this cancer complete the bone matrix, but this matrix isn't as strong as that of normal bones. Most of the time, this condition is present in young adults and children. Teens tend to be the most commonly affected of all individuals, but osteosarcoma can occur at any point in time.

It most commonly occurs in children who are going through puberty, and osteosarcoma often develops in areas where the bone appears to be growing quickly, such as at the spots near the ends of the longer bones. Most tumors develop in the bones surrounding the knee, the distal femur or the proximal tibia. The proximal humerus is the next common of all sites. An osteosarcoma can occur in any one of the bones, including that of the hips, jaw and shoulder.

Some bone tumours are benign, and not life-threatening. These are usually known as osteochondromas. Osteosarcomas unfortunately are malignant and account for 20% of all primary bone tumours. The current 5-year survival rate is 60-80% following medical treatment.

The bone cell becomes abnormal or mutates, and grows out of control. The cancer cells are like bone forming cells, known as osteoblasts. 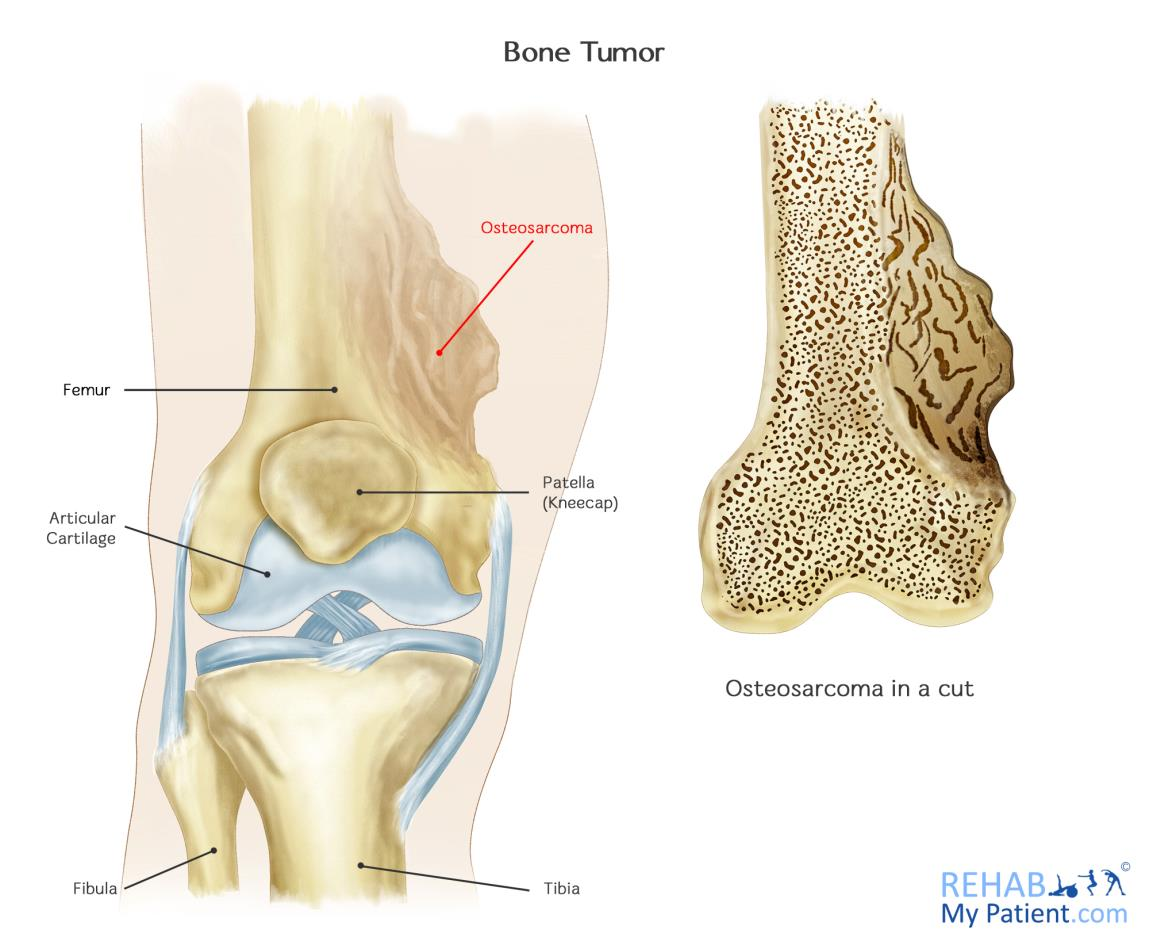 This leads to a type of osteosarcoma known as an osteoblastic sarcoma. Sometimes the cells look different to bone cells and this type is known as either a chondroblastic osteosarcoma as the tumour tries to form cartilage too, or a fibroblastic sarcoma where fibres are made instead of bony cells.

The rapidly growing bone cells joint other bone cells that form a tumour on the bone. This often occurs just above or below the knee joint. The cancer can spread into the blood steam and to other sites, like the lung.

Diagnosis is made by X-ray, CT scan or MRI scan. Its difficult to diagnose without a scan, but typically presents as unrelenting bone pain in the knee in young teenage children. The pain just develops for no reason, rather than being related to a sports injury. Night pain may also occur. The pain typically does not respond to conservative measures or physiotherapy, so at this point a scan is usually requested to further investigate the knee joint (or whichever joint is affected).

How to Treat Osteosarcoma: