The talus is a reasonably large foot bone that sits next to the heel bone. It has a keystone shape to it, almost like that of a turtle. The bones in the lower leg will ride on the top and sides to create the ankle joint. Where the foot and talus meet, the subtalar joint is formed, which is crucial for being able to walk on uneven ground. The talus plays an important role in the connection between the body, the leg and the foot. It works to help transfer pressure forces and weight across the joints.

Due to excessive trauma to the ankle or foot, the talus can end being fractured. Often this will be from jumping from a height, a high impact car accident, or another trauma where a lot of force occurs.

Initially the sufferer will be unable to weight bear, and ankle swelling will be significant. It is likely the sufferer will end up in hospital and undergo an X-ray. Occasionally a fracture may not be seen if there is no displacement of bone, but an X-ray may be repeated at a later date which can show the fracture.

The toes and the forefoot are composed of several bones. All of the four smaller toes begins with a metatarsal bone in the forefoot. As you move down the foot from the metatarsal, there are three smaller bones (phalanges). First, is the proximal phalanx. The middle phalanx comes next. Last is the distal phalanx.

The bones of the toes connect to form the toe joints. The MTP joint is the first one connecting the foot and the toe together. The MTP joints form the ball of the foot. The second joint is the PIP joint, while the last one of the DIP joint. All of the joints are surrounded by a capsule that is composed of ligaments holding the bones together. Two tendons run down the base of each toe, which allows you to curl your toes. A tendon running along the top of the toe helps to raise it. 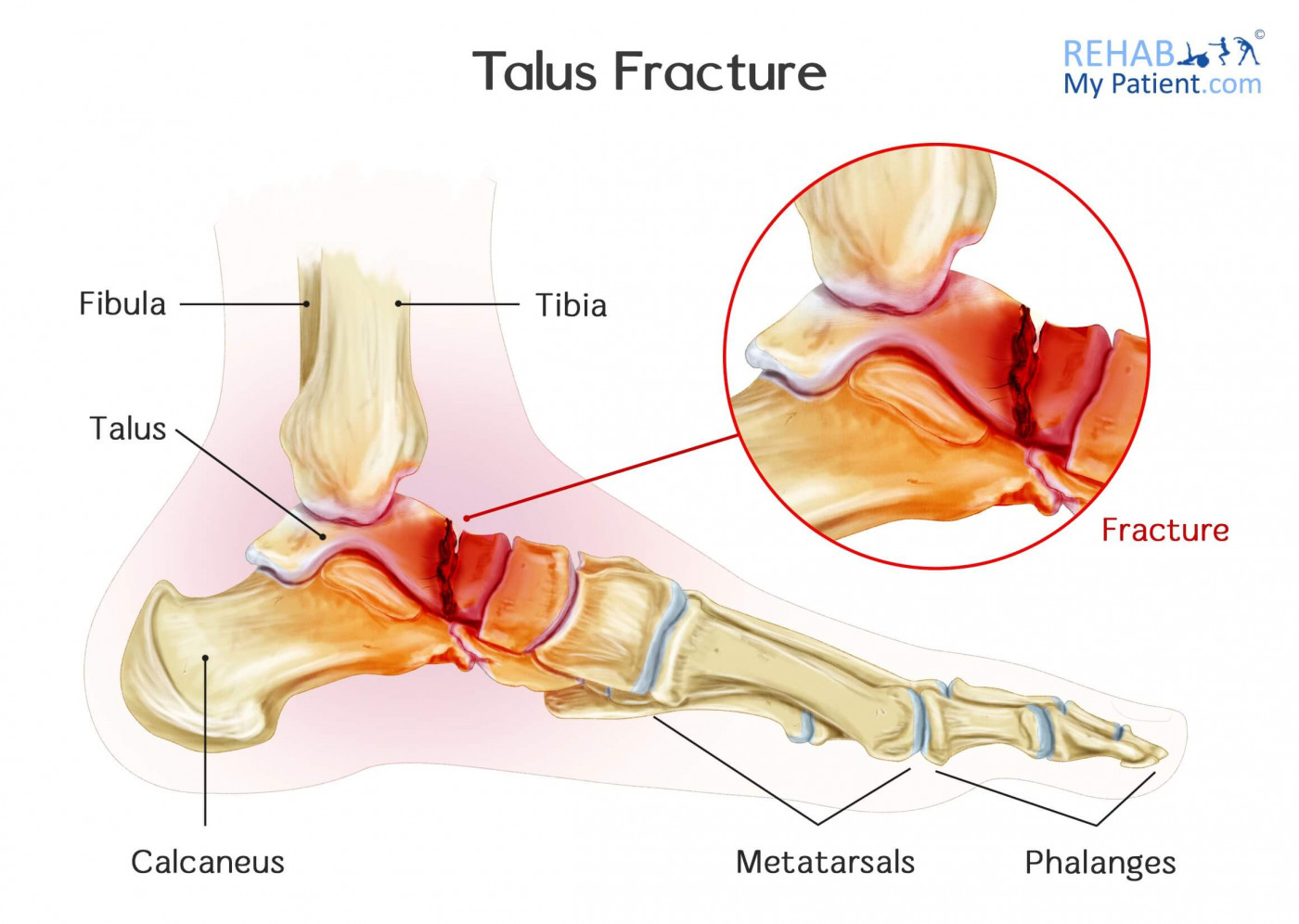 Do I Wear a Boot with a Talus Fracture?

It depends. You may be placed in a cast so will use crutches instead. However, you may be fitted with a special walking boot which protects the fracture but still allows you to be mobile.

How to Treat a Talus Fracture:

In rare instances, the fracture can be corrected without having to go through surgery. If the bones haven’t moved out of alignment, you might need to wear a cast for a minimum of six to eight weeks to allow the bone time to heal. You also won’t be able to put weight on the foot at that time.

After casting, you will be provided with exercises to help restore strength and movement to the ankle and foot.

Most of the time, you will have to undergo surgery to help minimize the chance of having complications later on down the line. The surgeon will realign your bones using metal screws to secure them in place. If small bone fragments are present, they are removed during the surgery and bone grafts are used to help restore the joint’s integrity.